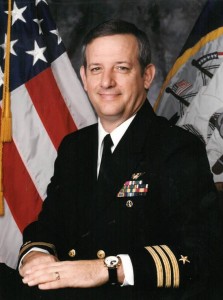 Gary Carter died a week ago. He was doing what he loved, riding his motorcycle on a beautiful fall day, when a car suddenly turned across his path, leaving no time or opportunity for him to stop or swerve. That quickly, he was gone. What does this have to do with national security? A lot. And not just because he had served this country and accomplished so much in leadership positions, in the U.S. Navy and federal government (most recently at the Department of Homeland Security), that kept us safe. But because of who he was, inside and out, and most importantly, how he lived his life.

Gary, quite simply, was a good person. That goodness was reflected in an incredibly strong moral compass that guided him throughout his life. He never wavered from its direction. I had the pleasure of working closely with Gary at DHS, first in his role as Director of Testing and Evaluation and then in his last position, as the Executive Director of Program Accountability and Risk Management, responsible for overseeing the acquisition process of programs worth billions of dollars and assessing their progress.

He never forgot, for a second, that the dollars being spent belonged to taxpayers and that the acquisition programs were for systems to keep them safe from and mitigate the effects of terrorism, natural disaster, and disease. He ensured that everything was done right and that the policies in place were followed. He always did this calmly, but firmly, and never ever wavered in his conviction—and he was always respected for it. This respect for the way Gary did his job was reflected in his receiving, posthumously, the DHS Distinguished Civilian Service Award.

His leadership in keeping us safe will surely be missed, but even more, it will be the person. He never forgot the teachings of his faith and his parents. From his mother, he learned selflessness and the importance of not holding a grudge. From his father, he learned that if something was worth doing, then it was worth doing right (and the bar was high). Gary’s own mantra, which he passed on to all of us, was to always do the right thing—even when it was hard.

What does this have to do with national security? Everything. At a time when confidence in our government and its leaders is at a low point, even among its employees, Gary serves as a role model for how it should and can be. The lessons of putting others first, kindness and generosity of spirit, doing the best that you can do, and most importantly, doing the right thing even when it is hard should serve as a moral compass for us all.

Good-bye, Gary, and thank you.

Dr. Sharla P. Rausch retired from the Federal Government after 27 years of service, last serving as the Deputy Director for the Office of National Lab Read More