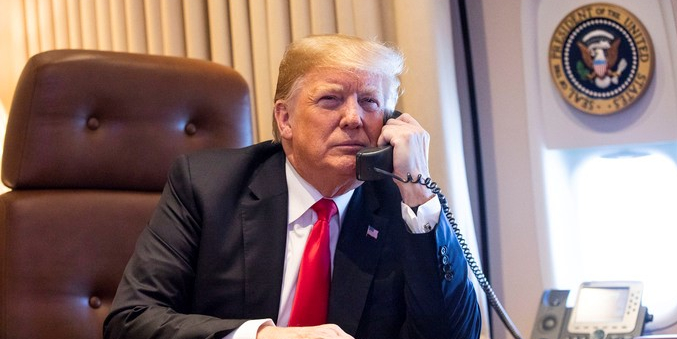 On Thursday, most cell-phone-owning Americans, residents and visitors were scheduled to receive a message from the President, a test of the “Presidential Alert” function in FEMA’s Wireless Emergency Alert (WEA) system. Facing some public blowback, as well as emergency management operations in the wake of Hurricane Florence, FEMA has pushed back the test to October 3.

If we set aside noted public concerns that the current president will upgrade from Twitter to directly text messaging the American people, there is a more profound question that should have been asked and answered when the Presidential Alert function was conceived and built. That is, under what emergency scenario is it necessary for the president to contact everyone? This question has not been answered.

On the face of it, one might think any major terrorist attack or natural disaster would rise to the level of presidential alert—but it doesn’t. All emergencies are inherently local, or perhaps regional. Whatever disaster occurs, be it manmade or natural, it happens in a specific place, and the United States is a big country. A hurricane barreling down on North Carolina has little relevance to someone in Oregon; an earthquake in California does not imperil the safety of someone in Florida. Indeed, ticking through every single disaster over the last century, this writer is hard-pressed to think of even one scenario that would justify the Presidential Alert. Not even the attacks on Pearl Harbor nor on 9/11 would be appropriate prompts for a national emergency message.

To be sure, the WEA system overall is a good idea, and it will save lives. It gives state and local emergency responders greater ability to warn the affected public. It enhances the Amber Alert child abduction alert system. These are good tools to have when threats arrive. But what of the presidential alert? Why does that exist?

Keeping in mind that some very smart people built this system after some presumably intelligent lawmakers called for it in legislation, let’s consider the hypothetical cases when the Presidential Alert would be necessary. And as a preface, remember this functionality is not for distributing news. Just because the United States is facing a catastrophe does not justify use of the WEA Presidential Alert. It is purely to distribute actionable safety and security information to the general public.

What then is a national emergency in which every American needs information ASAP in order to stay safe? These might rise to the level:

These are all black swan events—low probably, high impact. If the Presidential Alert was designed specifically for doomsday-type events, then it might be prudent to have such a tool available. And yet, there are quite a few ways in which this functionality could do far more harm than good.

How it Could All Go Sideways

When the public recently became broadly aware of the now-postponed FEMA test, many minds seemed to drift to Twitter and the kinds of things the President says in that forum. Some Americans expressed concern that the president would use this functionality for political purposes. The PL 114-143 states that:

That doesn’t necessarily settle the matter, as the word “relate” is rather ambiguous in the law. We can imagine a presidential message saying some disaster is approaching, followed by “And it was the Lyin’ Cheatin’ Democrats that refused to allocate funds to save you! SAD!”

That kind of tacked-on political message is a possibility, if not by the current president then by one in the future. We must also worry about whether the system could be hacked by a bad actor sending erroneous, even malicious information. Imagine if such a message contained a hyperlink to a website containing malware.

It seems most likely, however, that this functionality will (at some point) be used for an emergency for which it was not designed. And there’s the problem. If the event is not truly a national-level emergency requiring public action, then the president is simply spreading terrible news. That can have many negative consequences, among them:

Panic: In a disaster, a mass alert could engender fear and panic, which frustrates effective emergency management. An informed public armed with knowledge of what to in a given disaster is a safer public, but if an alert is sent to everyone and there’s nothing for most to do because it doesn’t affect them directly, think about the impact—a potential run on the banks, food and gas shortages, looting and other violence. If panic results, then the Presidential Alert has actually made the emergency situation worse.

Misinformation: Reliable information is not always available in an emergency. Often, as reports and data come in, the situational awareness and correct response is in flux. This is most true during a terrorist attack. The details of the attackers, the causalities, the scope and all the other data points that erupt in the chaos of a terrorist attack are usually wrong or incomplete in the first few hours. If misinformation is sent via the Presidential Alert, the implications are vast and not good.

Perceived Political Manipulation: Imagine a regionally specific presidential alert that was well-meaning but phrased in such a way that it suggested some political intent. That would immediately erode trust in the WEA system nationwide.

Actual Political Manipulation: Same as the previous but in this instance, the president really is trying to manipulate the public for political purposes. They might send a message during a large-but-nevertheless-regional disaster and time the message to coincide with an election or during heated congressional debates.

Overall, looking through FEMA’s website, DHS web pages, the legislation and the available information on the WEA Presidential Alert, the case has not been made as to under what circumstances, exactly, this functionality should be used. The best we can imagine is a “just-in-case” solution should the worst of all days arrive in terrible national calamity. And if that’s its purpose, then FEMA and others should simply say so.

The fact that they haven’t makes this writer highly suspicious that neither FEMA nor others have a clear use case for the Presidential Alert. Perhaps that would be a good piece of information to share during the October 3 test. I’d leave my phone on for that.

In Devastation from Hurricane Harvey, USCG Does It Again