Ever tried to get on Twitter only to find that frustrating white whale floating in a sea of blue with the message that the network is overcrowded and you should come back later? In the social media world, this is known as the Fail Whale. Twitter has failed us. Come back later.

During yesterday’s mini emergency in Washington, when a 5.8 earthquake shook the city and sent scared and confused folks fleeing from buildings (right into the line of any potential falling debris, by the way), we experienced a Fail Whale on the part of the Washington DC, government.

Cell phone service was down. Traffic on the DC roads seemed a bigger disaster than the earthquake itself. Buses — some crowded, some half empty — blocked lanes and intersections. Cars sat immobile. Metro was stop and go. Meanwhile people scrambled to figure out what had happened. (In this city, when buildings shake, more people think terrorism than earthquake.)

Unlike the righteous cluckers of California, many in the Washington, DC, and Virginia areas have little experience with an earthquake. They wanted guidance on what to do, whether there was a safe place they should go, how to avoid falling walls or other dangers should there be another temblor (all the reporters have dogpacked around this shiny new word, so I will too) or simply how to get out of the city with all of the arteries blocked and few traffic cops providing any direction. (God forbid a serious crisis had hit and panic overtook commuters fleeing the city.)

eturning to their office buildings where televisions might offer news, wandering among crowds of people with conflicting stories, looking at seemingly immobile traffic patterns, people didn’t turn to the DC government for help or insights. They turned to social media.

This is an increasingly common occurrence, and governments (whether municipal, state or federal) should be alarmed that they are becoming irrelevant to many citizens during times of crisis or disaster — whether it’s a homeland security incident, a natural disaster or a break in a water line. With their bureaucratic processes, their risk aversion, their paralysis over political repercussions, and their lack of awareness of (and oftentimes interest in) new communications technologies, government agencies are losing their positions as first-line trusted sources of information for the public. Increasingly, citizens aren’t turning to government officials for disaster management but to one another. And they’re doing it through social media.

I know I did. I was eating lunch at a local restaurant when the floor and walls and ceiling shook and everybody around our table looked anxiously about for an answer. During those first anxious moments, multiple alternatives flitted through our minds — being literally a block from the White House, foremost among them was a terrorist explosion or another wayward plane. Second, was an earthquake — but when has a real earthquake ever hit Washington? Some kind of metro subway collision? Alien invasion?

Social Media to the Rescue

Without phone service, there was no way to contact the Washington, DC government. Even if the phones had been live, the lines into the government would likely have been flooded by other anxious residents. At least initially, the website for the DC government – which could be a valuable source of information in an emergency – highlighted a picture of the mayor at a ribbon-cutting ceremony. If the DC government has a way of sending alerts to the private sector to help provide guidance, I’m not aware of it and it certainly didn’t work.

So I turned to social media. In truth, it was a natural reaction — even for me, with graying hair, not to mention an entire generation weaned on social media, using Twitter, Facebook, GooglePlus and a host of other social networks as a primary means of communication and information gathering. Thirty seconds after the earthquake hit, I was on Twitter reading dozens of well-informed posts. Within minutes, I was confident we faced a minor earthquake, not something more sinister, and felt reasonably comfortable going to a bar since my office building remained closed.

To be fair, DC does have a Twitter account. Well, it has 22 of them, all with different Twitter handles, which can make it a little tough to figure out where to go. There’s a homeland emergency management account that did get geared up. But there’s also a fire and emergency management account. Which one do you go to ? There doesn’t appear to be one centralized account. It’s too much to ask citizens to remember all of these accounts, particularity when they have little use for many of them. (Looking for information from the Department of Insurance, Security and Banking? Anyone … Anyone?)

One solution? Why not create a kind of social media 911 for emergency situations? Not simply a Twitter account but a hashtag dedicated to emergency situations. #DCcrisis perhaps. Something simple and easy to remember. A sustained public education campaign would be required to work this into the public consciousness so that anytime the city faces a crisis of some sort, it becomes as natural as dialing 911 to tap #dcrisis into your phone or on your computer.

How is this different from the city having a Twitter account (or 22 of them)? For one, it would be used purely for public emergency situations, not for marketing the mayor. Take a look at the city’s homeland Twitter handle, and you’ll see that prior to the earthquake hitting, the account was dedicated to promoting the unveiling of the MLK statue and the mayor’s activities around it. An emergency channel is not very credible if it’s half dedicated to emergency response situations and half dedicated to political marketing.

Another way in which such a hashtag would be different is that nobody would have to remember all of the city’s Twitter handles and which one is used for which purpose. This is where the public education campaign would be critical. (Such a campaign, by the way, would not have to be dedicated to Twitter or social media channels alone but to any channels through, digital or traditional, by which the city would direct information to the public during a crisis situation.

Finally, and most importantly, the hashtag would allow for true public engagement. A hashtag is not a property controlled by a government agency but is an open space, a digital public forum, for the exchange of information. It would allow crowdsourcing. It would take full advantage of observations, comments, questions, shared images, etc., of the city’s entire public network. It would allow the city to tap into a broad and diverse spectrum of citizen information and participate in that discussion, to correct misinformation, share guidance, and answer questions in a forum that exists in a viral environment. And for risk-adverse government agencies, it would allow the city to participate in this public dialog but also be held responsible only for the content it posts — not any other information that may or may not be accurate. Equally important, it would allow citizens to do what they are already doing anyway — talk to one another rather than rely on the government only.

In other words, it would be a shared forum – the real version of the mythic public-private partnership.

For those who did search and find DC’s homeland and emergency management account, they found some useful information eventually (though the amount and diversity of information posted was disappointing). Yet, these folks had more rapid access to more voluminous and diverse information from their own crowd-sourced networks.

What the DC government did not do was engage that crowd. There was some minimal retweeting — only three or four retweets of other government agencies or news outlets. No use of hashtags, either to find more information or to answer panicky questions from the public. No encouragement to Twitter followers to post questions that could be answered and shared with the crowd. No requests for eyewitness information or photos that might 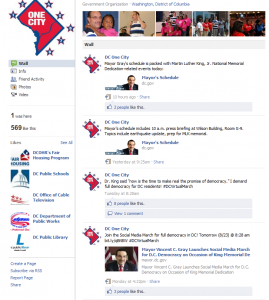 provide situational awareness of what’s happening on the ground around the city. No use of images, mash-ups or real-time maps by the agency itself.

Had you visited the Mayor’s Facebook page, you would have been forgiven if you came to the conclusion that he was oblivious to the fact that an earthquake had struck his city. There was was no reference whatsoever to the quake, much less any guidance to the city’s residents and workers.

No doubt there is resistance on the part of government agencies to allow anybody to post information for fear of misinformation making its way onto the site and the government being held liable — whether to lawsuits or political repercussions. Hence the unilateral manner of conversation … limited posts of varying degrees of usefulness all issued one way, from the city to … whomever. There are, however, ways to address liability concerns — the hashtag concept above being the first that comes to mind.

If not an emergency hashtag, city agencies could regularly post qualifiers about the veracity of non-government content. There are other approaches, and a team of competent lawyers and emergency management officials could come up with more, no doubt.

What if city governments maintain a risk-adverse style to crisis communications? What if they continue to avoid using social media in the way it was meant to be used? If they maintain a conservative, safe, unilateral approach to getting information to the public? If they continue to fear making a wrong move and cling to bureaucratic processes, running any public statement through an exhaustingly complex labyrinth of “proper channels?”

Quite simply, they become irrelevant. In today’s rapidly evolving media and communications landscape, the public won’t wait for the government. Indeed, they will have no need for it.

Hurricane Isaac Will Not Be Another Katrina