When it comes to terrorism, we hear a lot of things. We hear pundits debate the who: which group presents the biggest threat? We hear them debate the what. What should we do to stop them? The questions we don’t hear enough are perhaps the most important: why? and how? Why is this happening in any group? Why is this happening in one group more than another? More importantly, how do we prevent these people, regardless of ideology, from becoming radicalized in the first place?

In 2015, I worked with Security Debrief contributors Dr. Erroll Southers and Justin Hienz on the qualitative field study, “Foreign Fighters: Terrorist Recruitment and Countering Violent Extremism (CVE) Programs in Minneapolis-St. Paul.” The research effort focused on the Twin Cities because the area has had the highest number of Americans charged with terrorism in the United States since 2007. The majority of extremists from the area were either Somali immigrants or first-generation Americans.

Since 2007, there have been 50 documented cases of Americans from the Twin Cities area charged, convicted, or killed as a result of their support for Al-Shabaab and Daesh. The chart below showing departures does not include the many individuals who were apprehended prior to leaving the country, nor does it include those who left without authorities knowing – something that was widely reported in community interviews. 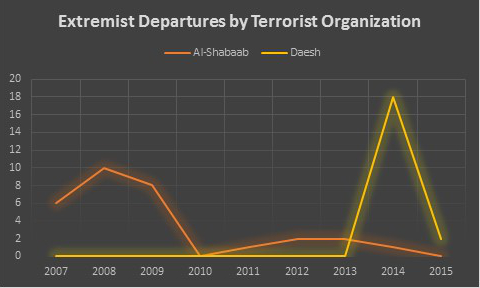 Most extremists (72.6%) were between 18-26 years old, and only 10% were female. However, the trend in female departures appears to be changing. All of the females who departed did so in 2014.

Based on the numbers, one stereotype can be dispelled. There is a common assumption that extremists are uneducated. This does not hold true in Minneapolis-St. Paul. Of all extremists with education history available, only 22.7% were high school dropouts. The remaining 77.3% had high school diplomas, and 15.4% of them attended college after high school. The average education level of all extremists was 12 years. A high school education may not sound impressive, but when you consider that Minneapolis had a 59% high school graduation rate in 2015 (up from 47% in 2010), the education of the average foreign fighter becomes a figure of relative success.

Of extremists who successfully departed the Minneapolis-St. Paul area to support foreign terrorist organizations, only half of them are presumed to be at large in their destination countries, and only three departed extremists are known to have returned to the United States. About 42% have been killed in Somalia and Syria while fighting for Al-Shabaab and Daesh. This shows that leaving to join a terrorist group is often a fatal decision, data that could be important for countering messages from Daesh that suggest joining the so-called Islamic State will offer any kind of longevity. 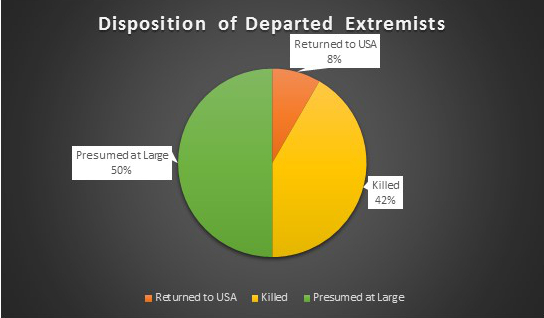 It is clear that while violent extremism poses a significant threat to the United States, it also presents a great danger to the individuals who join terrorist groups. To fight this ideology, we need to understand how Daesh and Al-Shabaab are capable of recruiting people, why terrorist messaging is attractive and perhaps most importantly, which counter-messaging could be successful in stemming the trend of foreign fighters.

Chris Fox is a Project Coordinator at the University of Southern California (USC) Price School of Public Policy and a researcher at the DHS Center for Risk and Economic Analysis of Terrorism Events (CREATE). Fox previously served as Air Force Special Operations JTAC with deployments to Afghanistan and Iraq. He holds a Master of Public Affairs from USC.

One Strategy Does Not Fit All Terrorists