The Transportation Security Administration’s (TSA) banned item list has long been the subject of criticism. There are arguments to be made that novelty baseball bats and cast iron pans could be used as weapons during flight—but neither those things nor anything else on the banned item list (short of munitions) would allow a bad actor to penetrate cockpit doors designed to withstand a grenade blast. So by this, it stands to reason that TSA agents are rightly on the lookout for grenades in carry-on luggage. But even as ferreting out this specific weapon from would-be attackers is a priority, recent comments from the agency suggest TSA believes its screening officers are unable to tell the difference between a hand grenade and an empty plastic bottle. 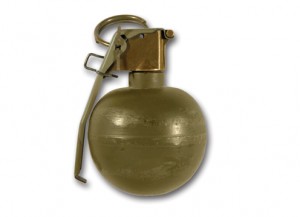 This is an M67 hand grenade. It is made of cast iron, weighs 14 oz and it has a big spring-loaded safety lever to the side, as well as a safety pin. Importantly, if it doesn’t have a safety lever or pin, it’s time to throw and run.

These are spherical plastic bottles made by Coca-Cola. They have a plastic cap with interesting notches, and when empty, they weigh about 0.16 oz. They do not have safety levers or safety pins. They are meant to loosely resemble the 100% fictional weapon used in Star Wars films, the thermal detonator. To be clear, thermal detonators are not real weapons, much like light sabers (replicas of which are allowed in checked bags).

The only similarity between the M67 grenade and these souvenir Coke bottles is that they’re both spherical. And yet, as TSA said in a statement on its website:

“The issue concerning Star Wars Galaxy’s Edge-themed soda bottles has recently been brought to our attention by the general public, as these items could reasonably be seen by some as replica hand grenades. We appreciate the concerns being raised, because replica explosives are not permitted in either carry-on or checked bags. While we continue to review this issue, TSA officers will maintain the discretion to prohibit any item through the screening checkpoint if they believe it poses a security threat.”

“Even w/ a normal bottle cap or opened, this item is still considered a replica & is not allowed in carry-on or checked bags. If our officers discover a replica item during screening & believes it’s real, the item will be treated as such until advised otherwise by law enforcement.”

Let’s leave the thermal detonators out of it. An empty Coke bottle could never be mistaken for a grenade. The material, the weight, the component pieces—in no galaxy (either in this one or another far, far away) could a reasonably competent person hold a bottle in their hand and conclude, this is a weapon. (And if there are TSA agents who struggle with distinguishing these sorts of objects, they might best be reassigned.)

All of this is preposterously hilarious, and TSA, once again, has done itself no favors with its consistently atrocious PR efforts (except for Blogger Bob; he was amazing, RIP). But there’s something else going on here, and it’s about checkpoint throughput.

If an increased number of air travelers are carting around their Star Wars souvenirs, the agents sitting behind the bag scanner are suddenly faced with a variety of spherical objects which, when viewed through X-ray, could, for a heartbeat, look suspicious. And since we know TSA is extra vigilant when it comes to explosives, that bag with an unknown quantity is going to get yanked for secondary inspection.

Once the bag is open, well, obviously that object is a plastic bottle. Except now we’ve got a TSA agent going through the sometimes lengthy process of cracking open a bag, and what if there are more Star Wars souvenirs in line? That leads to a queue of people awaiting secondary inspection, and they stack up on top of the regular level of secondary inspections. And all of this comes about in the lead up to Labor Day weekend, during which Airlines for America expects there will be 17.5 million air travelers. Trying to move that many people through security is tough, and any extra screening could slow throughput.

But if TSA is outrageous enough to catch everyone’s attention with a sentiment of, “Yes, we might really be this stupid,” then perhaps fewer air travelers will attempt to secret these souvenirs through security and thus, faster throughput, one supposes.

This writer hopes that throughput is the real reason for TSA’s insane policy banning replicas of fictional weapons. Because if it isn’t, and TSA agents really are this dense, to quote some Star Wars heroes, “I’ve got a bad feeling about this.”