In 2013, Minnesota was home to 38,873 Somali immigrants and Somali-Americans, the largest Somali population in the United States, according to the 2013 American Community Survey. This number has grown since then, and in any case is artificially small because, as sources indicated, many Somali immigrants (particularly those recently arrived from abroad) fear that responding to census questions and engaging any government initiative could put their legal status and personal wellbeing in jeopardy. This is a consequence of emigrating from a background where government services and law enforcement have engaged in aggressive, sometimes inhumane treatment of its civilians, as well as a misunderstanding of how the U.S. government system works and the civil rights and liberties guaranteed to every citizen and resident of the United States. 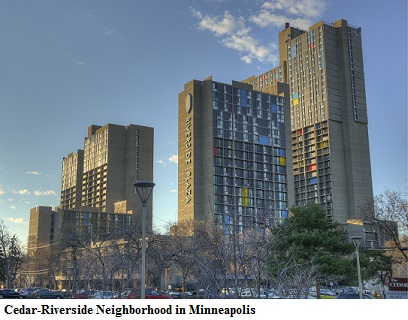 More specifically, Riverside Plaza, a public and affordable housing complex in the Cedar-Riverside neighborhood, is often the first place of residence for a new Somali immigrant. While the number of Plaza residents is around 4,000 individuals (the building capacity), community members and law enforcement estimated that the actual number of residents is closer to 10,000. Thus, the current overall number of Somalis living in Minnesota is unknown.

Of Somali households in Minnesota, 34.6% are single parent, with an average family size of 4.37 people. For Somali-Americans in Minnesota younger than 25, 39% do not have a high school diploma. And of the state’s 16-and-older age cohort, 31.9% of the Minnesota Somali population is not part of the state’s labor force, yielding a 55.1% poverty rate for Minnesota Somali-Americans and immigrants, 3.5 times greater than the overall U.S. population.

Nearly 60% of the Twin Cities Somali population was born in the United States, significantly more than the nationwide percentage, where only 37.29% are born in the United States. Thus, there are upwards of 20,000 Minnesota Somalis under the age of 25 who encounter substantial social and economic challenges, though, as shown in this report, poverty is less pertinent to recruitment vulnerability than other factors impacting the community. Young Somali-Americans seek to overcome these challenges in the face of targeted, sophisticated and ongoing recruitment efforts by terrorist organizations.

The densest Somali communities in Minnesota are in the Cedar-Riverside neighborhood in south Minneapolis (also called the “West Bank”) and the University Avenue area between Rice and Hamline Streets in St. Paul. There are also other sizable Somali communities throughout the greater Minneapolis-St. Paul area. While Cedar-Riverside is commonly a first stop for new Somali immigrants, sources reported that the goal for many residents is not to remain in the neighborhood but to establish themselves in their new society and move on to other areas in Minnesota. This is in part because the Cedar-Riverside area has historically been impoverished with significant crime rates. One source noted an occasion when a charitable organization began distributing second-hand clothes in the Cedar-Riverside area. West Bank residents lined up to receive the donations, leading one to comment, “It’s like we’re still in the refugee camp.”

Immigration to the United States
All sources for this report were originally born in Somalia or a neighboring country harboring Somali refugees. A first wave of immigration commenced in the 1990s and at the turn of the century, as famine and warfare pushed more Somalis into refugee camps in neighboring countries. Most sources for this report immigrated during this time period, 80% first immigrating to a city other than Minneapolis-St. Paul, including Atlanta, Louisville, Los Angeles, New York City, San Diego, Seattle, and northern Virginia cities.

Sources reported that during this first wave of immigration, the Twin Cities offered a wealth of jobs in the cities’ manufacturing and food industries, as well as a perceived absence of racial and ethnic prejudice that some sources experienced in other U.S. cities. The local and state government and religious institutions also offer important social programs and benefits. Today, sources reported that the draw to Minneapolis-St. Paul is less about employment opportunity and social services than it as about a cultural and familial infrastructure built over years of immigration.

Ongoing immigration also continues a trend of clan allegiances being transplanted to the United States. The Minnesota Somali community is made up of numerous confederations of qabil, or clans, the most prevalent being the Darod, Dir, Hawiye and Isaaq. These groups are composed of sub-clans, with lineage that can often be traced back hundreds of years. While these clan affiliations were central to the civil war that long-ravaged Somalia, in Minnesota, sources described clans as a form of insurance. For example, if a clan member were in a car accident but could not afford to pay the damages, clan members may contribute money to satisfy the debt or need.

This traditional form of community support does sometimes conflict with U.S. laws. As it was related to the report authors, a challenge for law enforcement is that clans often resolve conflict internally rather than turning to the U.S. justice system. Law enforcement sources discussed violent crimes, including homicide, within the Somali community that are resolved through xeer, a traditional method of conflict resolution driven by clan elders. In a case of violent conflict (such as a shooting), a clan may pay “blood money” as reparation for the violence. Once a clan-to-clan agreement has been reached, clan members are forbidden from discussing the crime with officials. This is a source of frustration for local law enforcement, as it leaves murders and other crimes unsolved for want of witnesses, sometimes including the victim themselves.

Immigration inherently challenges one’s identity, forcing one to reconcile “old world” tradition and culture with the social, ethical, legal and economic realities of a new country. While there are many differences between Somali and American culture, these do not necessarily prohibit evident patriotism and a deep appreciation for the United States’ guaranteed freedoms and readiness to accept refugees fleeing war and famine. Structured interviews yielded 119 positive statements about the United States, including sentiments about freedom, safety and the rule of law. Yet, there were negative sentiments about the Somali immigrant experience, including challenges to assimilation, racial tensions and a distrust of authority (notably, the FBI). There were also repeated references to a perceived sense of American animosity towards Islam, often in reference to airport screening.

Religion in the Minneapolis-St. Paul Somali Community
Islamic belief and tradition permeate every aspect of Somali society, guiding dress, relationships, education, diet, recreation, and a host of factors that make Somali society unique. Islam has a long history in Somalia. Historically, Islamic belief in Somalia was of the Sufi variety, which is a mystical interpretation of Islam that employs repetitive sayings and other devotional actions (dhikr) to reach a greater insight, connection, and worship of Allah. These longstanding religious traditions have changed in the face of regional and global conflict, and a brief review of Somali political history reveals how civil war and famine has impacted the country’s religious landscape.

For the last century, Somalia has been a battleground for competing geopolitical interests. Colonialism and two world wars brought modern weaponry to the country, and in 1969, the military dictator General Mohamed Barre took power in a bloodless coup d’état. As Barre revealed his dictatorial approach to rule, he formed the Somali Revolutionary Socialist Party, aligning the country with the Soviet Union during the Cold War. Barre nationalized industries, forbade clanism (even as he favored his own clan), and sought to supplant local and genealogical allegiance with loyalty to the state. Barre’s totalitarian regime and the violence it wrought prompted Somalis to begin leaving the country, a trend that would only increase in the decades ahead. 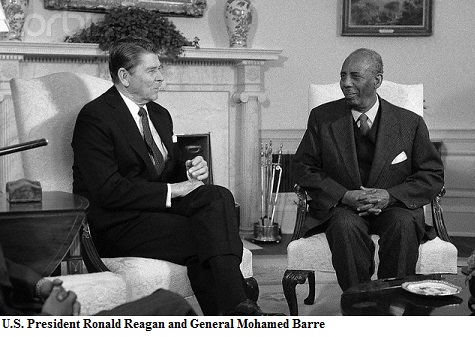 Barre invaded neighboring Ethiopia in 1977, and the Soviet Union sided with the communist regime in Ethiopia. Barre changed his allegiance to the United States, making Somalia an even more violent Cold War proxy battle, injecting substantial amounts of weapons into the country. When the Cold War ended and western aid evaporated, Somali government and society, plagued by decades of conflict, collapsed. Barre was forced from power in a coup and clan-based warfare erupted around the heavily armed country.

In 1991 and 1992, 25,000 people were killed in the capital city of Mogadishu, with 1.5 million people fleeing to neighboring countries and another 2 million people displaced internally. Widespread, persistent fighting and the breakdown of a centralized government authority contributed to famine that struck Somalia in the 1990s. While many Somali refugees have received residency and citizenship in other countries, and some have returned home, the United Nations Human Rights Council reports that there remain nearly 1 million Somali refugees, most harbored in Kenya, Ethiopia and Yemen, with smaller numbers in Uganda, Djibouti, Egypt and other nearby countries.

With clan structures deteriorating, elders and religious leaders killed in fighting, and the evaporation of longstanding social structures, a window of opportunity emerged for Islamic influence from other Muslim-majority countries, notably, the Wahhabist Saudi Arabia. Factions of Sunni Islam began to grow and influence the ravaged Somali society, one of these being Salafism. A segment of Sunni Islam, Salafism calls for a strict interpretation of religious literature, absolute adherence to Islamic law (shari’a) and an overall return to the theocracy reflected in writings about seventh- and eighth-century Muslim society. Indeed, in Arabic, salaf means “ancient one,” a reference to the first followers of the Prophet. This form of Islamic belief cannot accommodate the culture- and tradition-based, exploratory religious practice that is Somali Sufism. This is one reason why, even today, the Salafi-grounded al Shabaab systematically destroys Sufi shrines and other traditional religious infrastructure that deviates from the unforgiving Salafi theology.

Today, Sunni Islam is the dominant Islamic interpretation in the Minnesota Somali community. Only one source noted an awareness and understanding of Sufi belief and practice. This limited reference to Sufism in Minneapolis-St. Paul is perhaps less a reflection of religious preference than it is a consequence of civil war that has left many learned religious leaders and elders dead, unable to pass on their religious knowledge.

There are more than 20 mosques in the greater Minneapolis-St. Paul area. These mosques are not exclusively attended by Somali-Americans, though some congregations are predominantly Somali. Mosques and other Islamic centers are the locations for daily prayer, but there are also religious study groups and functions for a Muslim community. For example, Minneapolis-St. Paul is home to several Somali Islamic schools (dugsi), which simultaneously offer a Western academic curriculum and teachings drawn from Somali culture and tradition. Overall, sources indicated there are a plethora of opportunities in Minneapolis-St. Paul for a Muslim to garner religious knowledge and guidance, including Sufism.

Al Shabaab in Minnesota
In 2008, al Shabaab seized control of the Somali capital, Mogadishu, and the southern half of the country. Following an extremist Salafi theological interpretation, al Shabaab (Arabic, meaning “the youth”) initially garnered support among the Somali diaspora because they claimed to represent an Islamic nationalistic movement opposed to the interventions of neighboring countries and seeking to rebuild a nation. For a people lamenting the destruction of their motherland, elements of al Shabaab’s message resonated worldwide. While only during unrecorded, unstructured interviews, multiple sources said that they initially supported al Shabaab because they believed they were pursuing a reconstruction of a failed state.

After al Shabaab began aggressively recruiting Somali immigrants in Minneapolis-St. Paul, the community perception of the terrorist group began to change. Somalis who joined the group relayed stories of the atrocities they saw al Shabaab commit. Sources reported stories of young people who attempted to leave al Shabaab and return to their families in the United States but were executed by al Shabaab before that was possible. Word spread that the group was not the nationalistic movement it claimed to be, and one primary reason al Shabaab recruiting decreased after 2009 was that the community became more aware of al Shabaab’s true, terrorist nature and rejected it.